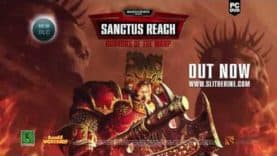 Slaanesh, Khorne, Tzeentch and Nurgle are extremely pleased: today marks the release of Horrors of the Warp.

Bloodletters, Plague Drones, Sould Grinders are ready to attack the surviving Space Wolves: who will prevail in the war torn Sanctus Reach system?

Warhammer 40,000: Sanctus Reach is back with a new expansion. You will lead the Space Wolves in the last chapter of the Sanctus Reach campaign: Logan Grimnar’s chapter will once again show its valour in a 16 scenarios single player campaign. In the Horrors of the Warp campaign you will have to face a new dangerous threat, the  Chaos Daemons.

Chaos Daemons have also been added as a new playable faction in Skirmish, with many new units each devoted to a different Chaos god! Servants and champions of Nurgle, Slaanesh, Khorne and Tzeentch are ready to swarm over Orks and the Imperium alike, with new mighty abilities derived from the Warp. Hordes of Bloodletters, crazy Chaos Spawns, fetid Plague Drones, and infernal Soul Grinders… the pits of Chaos are deep.

And here is the Slitherine page, with loads of screenshots -> http://www.slitherine.com/products/product.asp?gid=729

Slitherine released Warhammer 40,000: Sanctus Reach in 2017: a deeply tactical turn-based strategy game set in Warhammer 40,000 universe, where you lead the Space Wolves chapter against the flooding hordes of Grukk Face-Rippa and his Ork Red Waaagh! With the first DLC, Legacy of the Weirdboy, you swapped side and played as the Ork leader, while in the second DLC Sons of Cadia you return on Sanctus Reach as the Astra Militarium commander, leading the mighty Imperial Guard! Now it’s time for the third DLC, featuring the Chaos Daemons!

OG_eXodia
I am passionate about “Heroic Fantasy” and “Beat Them all” games on Nintendo Game System (I hate SEGA). Now that I am old, I love retro gaming, since I don’t have much time. Feels good to watch endings though…
(Visited 11675 times)
DLCWarhammer 40000

We Are The Caretakers Defends the World on Steam