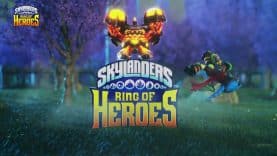 In the new guild battle, at least 10 guild members will have to work together for a strategic battle. Anyone will be able to participate in the guild battle that’s held in seasons as long as they’ve joined a guild. One season consists of 5 battles and each battle will be played for 2 days followed by a day of break time.

There are 10 bases in the guild battle and users can use Energy that’s provided every day to defend ally bases or occupy the opponent bases with the decks they’ve formed. The guild that occupied more bases until the battle ends will win. Users will get guild points according to the guild battle result that’s tallied by season and use the points to get various upgrade items.

Com2uS has also prepared a special event where users can get various game items just for participating to celebrate the new cooperative content update. Users will be able to get the Premium Summon Ticket, which can be used to get the best grade Skylander, and other various upgrade materials just for checking in until the 12th. In addition, mission events will be held with the subject of the new guild battle to help the user enjoy the new content and get rewards.

Skylanders™ Ring of Heroes is a new kind of a team turn-based RPG created based on Activision’s IP. The game provides the fun of collecting and upgrading Skylanders with colorful and unique characteristics, and the pleasure of strategic battles with various skills.

Nexon Launches Romance of the Three Kingdoms: The Legend of CaoCao (Tactics) on PC