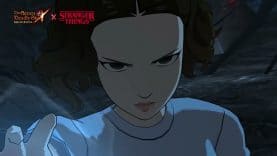 The world of The Seven Deadly Sins collides with a new dimension – the Upside Down – as part of a major collaboration between the Netflix Original Series Stranger Things and Netmarble’s cinematic adventure role-playing game (RPG) The Seven Deadly Sins: Grand Cross. Launching today, players who log-in to the game and play the collab contents from April 27 through May 11 will get to choose from a variety of fan-favorite Stranger Things characters and receive plentiful, high-value rewards, including 1x SSR [Stranger Things] Jim Hopper character, 30 Diamonds, 10x Collab Pick-Up Draw Tickets, and limited-time collaboration costumes for free!

As the franchise’s first-ever collaboration featuring live-action characters, today’s update introduces four Stranger Things’ characters for the first time ever in an anime game, including Eleven, Jim Hopper, Mike Wheeler, and Will Byers – all of which can be collected via the Collab Pickup Draw and will start at maximum grown state (lv.80 and fully awakened).  Players who reach 300 mileage via the Pickup draw will receive an extra SSR hero, while those who reach 600 mileage will be able to get one of the four Stranger Things collaboration heroes.

With the kingdom in crisis, Knights will prepare for battle with a new World Quest starring the Stranger Things heroes, explore the Upside Down via an in-game event, and work together with The Seven Deadly Sins: Grand Cross heroes in defeating the Mind Flayer to save the day. Players will claim special rewards like costumes, diamonds, and other limited-timed items in the process. Players can also undertake the Collab Special Mission; if they complete six missions such as Event Check-In, World Quest, and the Event Exchange Shopwithin the event period, players can claim special rewards, including Jim Hopper hero character for free.

Other limited-time events in the game include:

The Seven Deadly Sins: Grand Cross translates the storytelling and adventures of The Seven Deadly Sins into a highly engaging and entertaining mobile gaming experience, featuring stunning, high-resolution 3D graphics, with more than 150 characters, 200 costumes, and 200 dramatic cutscenes. The game is brought to life with the cast of the original Japanese voice actors reprising their characters. Since its launch in March 2020, the game surpassed 30 million cumulative downloads in a year across the world.

Thor: War of Tapnarok: Even Thor needs a furry friend!

Draw a Stickman: EPIC 3 Launches on Mobile and PC Platforms