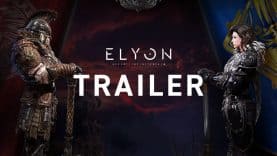 Kakao Games and Bluehole Studio are excited to announce that Elyon’s first closed beta test will begin on May 6 at 12:00 UTC, running until May 10 at 8:00 UTC. Players have been selected from sign up requests, but even if you were not one of them, there will be many opportunities to gain access through various events and partnerships!

Players will be able to play all the game’s general contents localized in English. During the weekend (May 8-9) players can also experience massive scale Realm Wars and Clan vs Clan Wars.

Throughout the beta, Kakao Games will be broadcasting on their Twitch channel from May 6 to 9 between 15:00 and 21:00 UTC. The broadcast will provide an introduction and guide to Elyon’s mechanics & classes, interviews with community players and our very own CM Karim participating in the Realm Wars. For players who have not received closed beta access, a number of keys will be provided, along with a small amount of game passes that can be used during the official launch later this year!

Over the past few years Elyon (formerly known as A:IR) has gone through vast changes in many parts of its gameplay experience, from leveling flow adjustments to the conversion of the combat into an action-based system. While Bluehole Studio, Inc. are continuously working on making Elyon a great MMORPG, Kakao Games are preparing at an ever-increasing pace to release the game outside of Korea and are excited to hear players’ feedback!

Game Features:
> Extensive character customization
Create your own unique character with extensive customization tools and detail-oriented options. Want to go the extra mile? Take your look to the next level with the Equipment Dye system.

> Clan Wars
Compete with other clans and establish yourself as the best of the best. Top clans get to control Dimensional Portals and collect taxes from any player that enters them.

> Gather, craft, and trade
Make your own high grade equipment and other consumables that will aid you in battle. Have unused materials? You can sell them via Trading and make a profit!

> Open-world PvP
Players of opposing Realms can attack each other anywhere in the world. When in conflict zones, players can claim Laurel Wreaths of Greed, allowing them to attack any player be it enemy or ally – but the use of such power comes with dire risks.

> Dungeons, Arenas and Dimensional Portals
Enjoy a variety of PvP and PvE content, from classic 1vs1 to Free For All arenas, to dungeons filled with clever mechanics. Dimensional Portals will lead you to planes of rich resources that will help you become stronger.