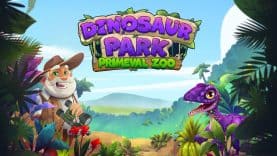 Upjers, the developer and publisher of popular online games, announces the release of Dinosaur Park: Primeval Zoo today. As of now the app can be downloaded from the Android Play Store worldwide. A version for iPhone and iPad is currently still in the making.

In Dinosaur Park: Primeval Zoo players run their own dinosaur leisure park. Earlier the dinos had been discovered in the perpetual ice of the south pole and are now resurrected. The newly appointed park directors’ task is to set up a beautiful environment in which the primeval giants as well as the marveled visitors feel comfortable.

To achieve this suitable enclosures, snack bars, and decorations have to be set up. The park will become bigger in the course of time and a continuously growing number of dinos and attractions will be added. The managers can conclude friendships with fellow players and visit their parks to help them out.

However, the centerpiece of the game are the magnificent dinosaurs. The animals are elaborately drawn and animated with a great passion for details. Among other things they react to players’ actions and intensely occupy themselves with the play items in their enclosures.

Today, on its release date, the app already includes 45 different dinosaur kinds, which are eager to move into the park. upjers will constantly include even more primeval animals and lots of game content. Of course there will also be events on a regular basis, during which players will be able to earn great rewards.

Dinosaur Park: Primeval Zoo is free to play and now available for download from the Android Play Store worldwide.

An iOS version is being developed and planned to be released soon.

SnowRunner mods have arrived on consoles!