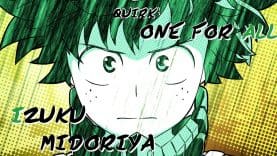 A PLUS JAPAN is bringing its action-RPG My Hero Academy: The Strongest Hero to mobile devices in Europe (w/o UK, Ireland and Scandinavia), Central Asia, Sub-Saharan Africa, and Turkey this May.

This free-to-play adventure submerges you in Kōhei Horikoshi’s popular anime series based on the manga from Shōnen Jump. Roam around a fully realized 3D adaptation of the city wherein you can assume the role of iconic characters such as Midoriya, Bakugo, Todoroki, and Uraraka, among others. Choose any three characters to form your own squad and embark on quests either solo or with friends. Each character comes with their own signature Quirks, and you can swap them out at any time. Train them, upgrade them, equip them, and even feed them, as you forge the most powerful posse imaginable.

Voiced by the same actors as the animated series, My Hero Academy: The Strongest Hero lets players experience many of the saga’s most iconic moments as well as a host of all new original scenarios. Accept missions from pro heroes ranging from protecting people to arresting criminals! Become a symbol of peace for the bustling city!

This is a living, breathing world, with Daily quests, login rewards, special stages, big boss fights, and new characters constantly being added on a regular basis. Join Unions to create your own makeshift hero agency and decorate the Heights Alliance dorms!

You don’t have to fight alone, either. Find other players in the open world to strike up a conversation, send emotes, and make new friends. And if you’re feeling particularly competitive, feel free to challenge opponents in one on one duels in the live PVP arena.

Learn and play through a fun story in Vic the Viking: Adventures!