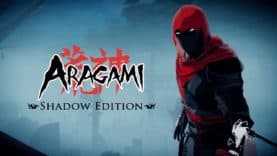 June 5th, 2018 Barcelona, Spain – Aragami: Shadow Edition and the story expansion Aragami Nightfall is out now for PC, PlayStation 4 and debuting on Xbox One.

About Aragami:
Aragami is a 3rd-person action stealth game that casts you as an undead assassin with the power to control the shadows. Teleport to any shadow, become invisible, materialize weapons or even summon a shadow dragon to infiltrate the enemy ranks and dispose of your targets.

Aragami is a game heavily inspired by old-school stealth games like Tenchu and Metal Gear Solid, and more recent gems like Mark of the Ninja and Dishonored. Use your powers to play as a Ghost, remaining undetected and getting to your target without a whisper. Or you can play a total Demon, slaying everyone in your path and using your powers to wreak havoc on those who would stand against you.

About Aragami Nightfall:
Aragami Nightfall is a  4-chapter prequel that takes place right before the events of the base game andfillsinthe some key narrative points left open in the original game. 2 new playable characters, all new deadly shadow powers, and an expanded storyline that can all be played in single player or cross-platform online co-op are all coming soon.

The Quantum Astrophysicists Guild is releasing a limited-edition physical copy of their landmark title, “The Bridge,” on PS4