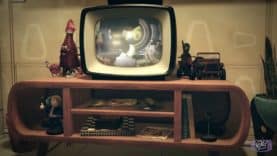 After nearly twenty-four hours of waiting: the next video game from publisher Bethesda will be Fallout 76, the new opus of the series of post-apocalyptic role-playing games. This is what Bethesda announced Wednesday, May 30, by broadcasting a trailer of just over a minute. In the twenty-four hours that preceded this release, Bethesda’s Twitch channel had broadcast a still image of the Vault Boy, the show’s mascot, putting a strain on fans’ patience and fueling the most far-fetched theories.

Slow backtracking, blues or country music, retro-futuristic gadgets: this video, if it does not reveal much of the game, takes all the codes of the saga. Just guess that the action will take place in the year 2102, well before the other episodes. Fallout takes effect in a futuristic and parodic America, ravaged by a nuclear war, but culturally remained stuck in fantasized 1950s.

This trailer ends with a shot of a character seen from behind. The number 76 is read on the cover, suggesting that the story is related to fallout shelter 76, already mentioned in Fallout 3. More information is expected by Monday, June 11 at 3:30 am a conference Bethesda will hold on the sidelines of E3, the annual video game show in Los Angeles.

According to American journalist Jason Schreier, Fallout 76 should, to a certain extent, benefit from an online component. Still, according to Kotaku’s specialized journalist, Fallout 76 will not be fully developed internally, but also by the Austin Texan branch of Bethesda

OG_eXodia
I am passionate about “Heroic Fantasy” and “Beat Them all” games on Nintendo Game System (I hate SEGA). Now that I am old, I love retro gaming, since I don’t have much time. Feels good to watch endings though…
(Visited 11725 times)
bethesdafalloutfallout76

Learn and play through a fun story in Vic the Viking: Adventures!