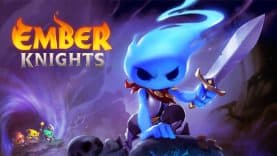 Ember Knights is a co-op hack and slash rogue-lite inspired by epic rogue-lites like Hades and Dead Cells with the multiplayer fun of Castle Crashers in the style of classic Nintendo like The Legend of Zelda, Chrono Trigger and Secret of Mana.

The Combat Demo will have players explore the Dark Forest in its entirety. They’ll start their adventure by choosing from a variety of available spells, powerful attacks to use in combination with their Sword and Furious Charge ability. Spell options include Inferno, Bomb, Frost Wall, Fissure and Missile. Happy with their choice, they’re now ready for combat. Players will travel from room to room and floor to floor defeating various enemies each with their own unique behaviors. Players will encounter the Vampiric Moth miniboss at the end of the second floor. At the end of the third floor, the demo ends with the final boss fight, an epic battle against the Corrupted Weaver.

Being a rogue-lite, each run is different and players are encouraged to run again, perhaps trying out a new spell.

Sex, drugs, and rock ‘n roll – a killer encore for We Happy Few