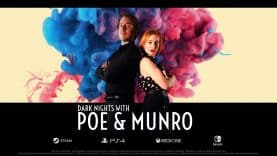 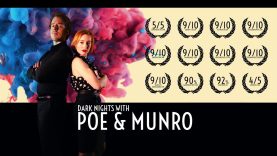 A new live-action game in the form of a TV series arrives on Xbox and Playstation today, with all six interactive episodes available to binge-play at once.

Dark Nights with Poe and Munro is an anthology of supernatural tales about late night radio hosts and secret lovers John ‘Poe’ Pope and Ellis Munro.

Each 20-30 minute episode features up to 29 “hotspot” decision points which players can use to direct the action and unlock alternate story branches and endings. Episodes can be replayed in any order and hotspot timers can be frozen for a more casual experience.

Dark Nights is the third game from husband-and-wife indie developers D’Avekki Studios, whose previous titles ‘The Infectious Madness of Doctor Dekker’ and ‘The Shapeshifting Detective’ were published to consoles by BAFTA-winning Wales Interactive.

Tim Cowles, founder and director of D’Avekki Studios, said: “We’re big fans of TV and FMV games so it’s always been a dream to merge the two.

Netflix has some one-off interactive specials and there are a few interactive movies, but Dark Nights with Poe and Munro is the first live-action FMV game TV series on consoles. This is also our first time self-publishing to consoles, and hopefully we can inspire other indie developers that want to make that leap too.”

Today’s release is fully compatible with Series X/S and PS5 and is accompanied by a 60 second launch trailer showcasing each episode.