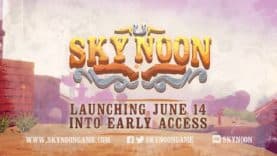 Gamers can also participate in the Sky Noon Gleam campaign for a chance to win prizes from Gunnar glasses, Logitech, and DX Racer. To enter, ‘Like’ the game on Facebook, follow us on Twitter, join the Discord, and add the game to your Steam wishlist.

Try not to get swept away to Oz in this floating tornado high in the sky!

Named one of the Best Indie Games at PAX East 2018*, Sky Noon takes place in a reinvented Wild West universe where the frontier floats among the clouds. Powerful cartels crave to control the most precious resource in the West: water. Players take the role of hired gunslingers that battle opposing fighters across floating islands in the sky. There are no health meters in Sky Noon; instead, to eliminate enemies, players use various super-power compressed air weapons to send them flying out of their boot spurs! Grappling hooks and lassos must constantly be used to prevent players from falling off into the great blue sky. Combined with other items like steam-powered jetpacks, jump pads, and teleporters, cowboys need to be quick on the draw and light on their boots in the fast-paced, aerial mayhem of Sky Noon.Sky Noon will be launching on Steam Early Access on June 14 at the S.R.P. of $14.99. Cowboys looking to join the gang should follow the game development on Twitter, ‘Like’ us on Facebook, connect on Discord, check us out on Reddit, and visit the official site SkyNoonGame.com.