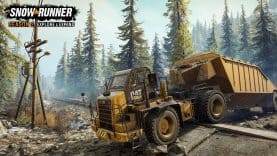 Saber Interactive and Focus Home Interactive, in partnership with Western Star, are proud to announce the new Western Star 49X has joined the SnowRunner garage! Available to purchase now on PlayStation 4, Xbox One, and PC as standalone DLC, SnowRunner owners can take the groundbreaking new truck for a ride before its release in the real world. With this tantalizing reveal trailer and new screenshots, you can see the All-New Western Star 49X in action.

This is a powerful and versatile heavy duty truck; great on the road, and capable in the mud. Its heavy frame and strength makes it perfect for hauling heavy semi-trailers. This next-generation truck has a unique and controllable additional axle that can deal with difficult terrain.

The DLC was made possible by the great partnership between Western Star, Daimler, and Focus Home Interactive, who have been working together since MudRunner: American Wilds. Focus and Saber are excited to bring this robust new truck to SnowRunner fans everywhere.

GET READY FOR THE NEXT-GENERATION OFF-ROAD EXPERIENCE!

SnowRunner puts you in the driver’s seat of powerful vehicles as you conquer extreme open environments with the most advanced terrain simulation ever. Drive 40 vehicles from brands such as Ford, Chevrolet, and Freightliner as you leave your mark on an untamed open world.

Overcome mud, torrential waters, snow, and frozen lakes while taking on perilous contracts and missions. Expand and customize your fleet with many upgrades and accessories including an exhaust snorkel for heavy waters or chain tires to battle the snow.

Ride solo or with other players in 4-player co-operative and expand your SnowRunner experience with community-created mods!

DORAEMON STORY OF SEASONS LAUNCHES FOR NINTENDO SWITCH AND PC