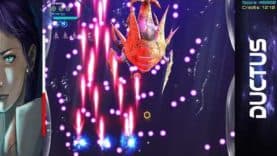 JOP Studios is proud to present its first title, Star Gods, a fast paced and action packed shoot’em up guaranteed to spark childhood nostalgia. Star Gods takes inspirations from past titles such as Gradius,  Radiant Silvergun and Ikaruga to provide a modern update to the classic games or yore. Available on Steam Store: https://store.steampowered.com/app/1179500/Star_Gods/

Join Jane as she journeys through the cosmos to unravel the truth behind the existence of the Star Gods and the mysterious disappearance of her soul mate, Izil. Her battles will take her across space, time, other dimensions and even the pits of Hell where she will come face to face with the dreaded keeper of tortured souls, Diabolous.

Star Gods features 7 action packed levels of old school arcade goodness featuring a rockin’ soundtrack by the legendary Wingless Seraph and a brand new unreleased single titled The Edge of Nothing by the up and coming rock band, Phoenix Rising.

-Unlockable ships each with their own unique abilities
-Over 20 dangerous enemies ranging from destructive battle cruisers, to souls of the damned.

-Dialogue driven story with full voice acting for each character.

OG_eXodia
I am passionate about “Heroic Fantasy” and “Beat Them all” games on Nintendo Game System (I hate SEGA). Now that I am old, I love retro gaming, since I don’t have much time. Feels good to watch endings though…
(Visited 1235 times)

ONE PUNCH MAN: A HERO NOBODY KNOWS! the game

Gatewalkers’s new trailer. Open alpha is about to begin!

Top 10 Best Twitch channels: Among us