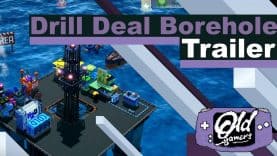 Drill Deal: Borehole (Alpha) is being developed by the independent Polish studio A2 Softworks, which is also responsible for Gatewalkers, a cooperative action game that has been very well received by the players. The new release will be published on PC by Red Dev Studio S.A. and Ultimate Games S.A.

Drill Deal is a title designed with focus on single player gameplay, combining elements of economic strategy, simulation and base building. The title distinguishes itself through voxel graphics, humour-filled atmosphere and intriguing gameplay. The developers from A2 Softworks place the greatest emphasis on the strategic and economic elements.

“Drill Deal is a one-of-a-kind project. The player’s goal is to properly manage an oil rig. Apart from taking care of the extraction of raw materials, you will also see to their processing and subsequent sale. Aspects such as technology development and employee care also play an important role. There is no shortage of random events. You will have to deal, for example, with environmentalist protests, natural disasters and pirate attacks” says Andrzej Stroiński, CEO at A2 Softworks.

As the creators explain, in the free Drill Deal: Borehole (Alpha), players will find, among others, 2 levels (tutorial and one fully-fledged scenario), more than 20 unique building types and 15 resource types to extract/process.

The final, paid edition of Drill Deal will offer a lot of additional content. In total, the game will include a full campaign (6 highly varied scenarios), sandbox mode, new advanced technologies and elements for expanding the oil platform, as well as numerous other attractions.

“Operating and managing an oil rig in Drill Deal is no easy matter. The player must take various factors into account and manage numerous different elements. The individual scenarios are significantly varied and give you freedom when it comes to choosing the strategy of action. It is a game that definitely stimulates creativity, which should especially appeal to fans of titles such as Two Point Hospital, Factory Town or Buoyancy” – says Rafał Jelonek, COO at Ultimate Games S.A.

Successor of the popular Bus Simulator game series for PC and consoles announced!

Company of Heroes is coming to iPhone and Android soon!

HONEY, I JOINED A CULT LAUNCHES INTO STEAM EARLY ACCESS ON 14TH SEPTEMBER