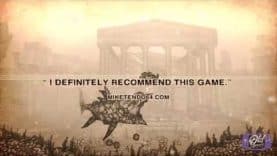 This action game is probably the most original and best shoot’em up ever. Reminds me a lot of gradius or Pop’n Twinbee.

Come grab your Earth Atlantis game pre-orderable on Xbox One, featuring a discount with 20% off.

The game is set in a post-apocalyptic world. A climate shift has struck the earth and marked civilization’s downfall. With most of the land now being completely flooded, life is only possible beneath the ocean.

The unique visuals of Earth Atlantis feature the style of old sketches, reminiscing a time where sea exploration commenced and the sea was believed to be inhabited by fantastic as well as dangerous creatures. Now, once again, the world has to be discovered.

Re-balanced gameplay mechanics make Earth Atlantis more enjoyable even for non-hardcore shooter players, while retro fans will be happy to hear that they can also use the d-pad for steering their ship.

In this future maritime world, the machines have found a new place in this underwater environment, too, and now roam the seas as terrifying hybrids of creatures and machine. Board one of four individual submarines – each with different weaponry and advantages. Hunt down huge bosses in an intense retro style side-scrolling shooter and rediscover humankind’s sunken world.

About Earth Atlantis
“The Great Climate Shift” struck at end of the 21st century. Ninety-six percent of the earth’s surface is underwater. Human civilization has fallen. Machines have adopted the shape and form of marine animals. The ocean is full of creature-machine hybrid monsters. You are a “Hunter” and the new journey begins…

Earth Atlantis is a side-scrolling shooter with an original “Monster-Hunting” gameplay. Search and hunt down dreadful sea monsters and explore the post-apocalyptic underwater world. Unlock multiple ships with special weapons and abilities for your journey and become a legendary hunter!

The game features the visual style of old sketches, reminiscing the 14th century, a time where ocean exploration commenced and the sea was believed to be inhabited by fantastic as well as dangerous creatures. Now, once again, the world has to be discovered. Board one of four individual submarines, each with different advantages and weaponry, and hunt down huge bosses in fierce battles.

Awards
Earth Atlantis won the “Vermilion Gate” Award (Best in Show) during the 5th BitSummit 2017 in Kyoto, as well as the “Excellence in Art” Award during BIC Festival 2016 in Busan.
(https://www.headupgames.com/exchange/presse/2018/EarthAtlantis/Artwork/EarthAtlantis_Awards.jpg)

About Headup Games
Headup Games is a hybrid games publishing and development company providing players worldwide with the best content in the independent gaming sector. Established in 2009, it is active on all major platforms such as consoles, mobile devices and PC, and was awarded as “Best Publisher” at the German Developers Awards in 2012, 2013 and 2017. With over 70 million customers served on mobile and further several million players on the PC and consoles, Headup Games is always looking to raise awareness and commercial success for developers thinking outside the box. More information can be found at www.headupgames.com .

About Pixel Perfex
Pixel Perfex is an award-winning independent game developer and design studio with the goal to develop unique and innovative games. More information can be found at www.twitter.com/pixelperfex  and www.pixel-perfex.com .

OG_eXodia
I am passionate about “Heroic Fantasy” and “Beat Them all” games on Nintendo Game System (I hate SEGA). Now that I am old, I love retro gaming, since I don’t have much time. Feels good to watch endings though…
(Visited 12535 times)
Earth AtlantisPixel PerfexPS4Xbox One

Call of Duty Partners with Blizzard Entertainment to Bring Black Ops 4 to Battle.net