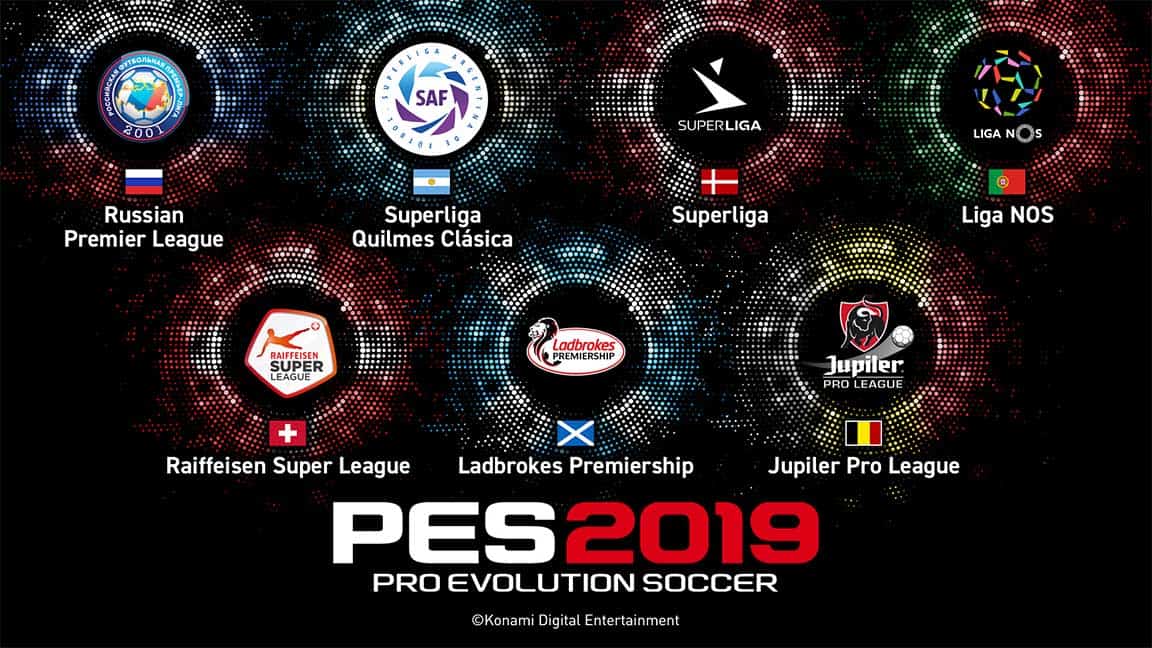 Konami Digital Entertainment B.V. has today announced that PES 2019 will feature seven new fully licensed leagues, with seven confirmed and two more to be announced at a later date. This announcement is part of KONAMI’s ongoing commitment to increase the number of licenses within the PES series.

KONAMI is especially thrilled to have signed the rights for the Russian Premier Liga exclusively, making PES 2019 the only football game on the market where fans can have access to the entire league featuring top clubs such as CSKA Moscow, Zenit St Petersburg and Spartak Moscow.

With the latest PES instalment being made available on 4K HDR across all platforms as well as the use of ‘Enlighten’ software for true-to-life visual effects and real time ‘Global Illumination’ lighting and shadows, PES 2019 will offer fans improved in-game graphics. This means better crowd detail, real grass textures and the return of the incredibly popular snow weather effect making those matches in Moscow even more realistic!

“Announcing seven new, official football leagues for PES 2019 is a clear sign that we are committed to giving fans more of what they want – more licensed content,” commented Jonas Lygaard, Senior Director for Brand and Business Development at Konami Digital Entertainment B.V. “We are more confident than ever in the direction the franchise is headed and this is just one of many steps we are taking to elevate PES to new heights. We continue to believe in the Power of Football and PES 2019 will be our most powerful game yet featuring more fully licensed leagues and clubs than ever before.”

PES 2019 will be available on PlayStation®4, Xbox One™ and PC via Steam on August 28th in the Americas and August 30th globally. PES 2019 will be available in two physical editions, with new global ambassador Phillippe Coutinho on the front cover of the standard edition and David Beckham on a special edition which gives fans the opportunity to unlock myClub bonuses. Also available at launch will be a digital-only Legend edition that will include even more content for myClub!

OG_eXodia
I am passionate about “Heroic Fantasy” and “Beat Them all” games on Nintendo Game System (I hate SEGA). Now that I am old, I love retro gaming, since I don’t have much time. Feels good to watch endings though…
(Visited 11605 times)
konamiPES19Pro evolution soccer

HUNTDOWN storms onto pc and console on May 12th

They Wait for You In the Endless Dark!