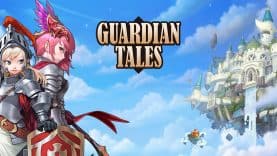 Mobile Action-Adventure brings back classic adventure gameplay to a worldwide audience on Android and iOS devices.

Kakao Games has launched their newest mobile game, Guardian Tales, for worldwide markets today. After making the game available in Canada and select European markets earlier this summer, the publisher is now happy to share that players worldwide will be able to start their quest in the retro-styled action-adventure.

Guardian Tales has players traverse charming, retro-styled levels and dungeons as they complete their epic quest. To help them, players recruit various helpful characters to assist them during combat, find new items, and upgrade their characters to make them more powerful. But power alone won’t be enough, via puzzles and other mechanics players will have to use their wits to overcome these challenges.

When creating Guardian Tales, the studio behind it was hugely inspired by the rich history of videogames on all platforms. Wishing to bring back the joy and fun of retro games via a new mobile game, the developer created Guardian Tales. As such players will be encountering numerous homages to classic games in the levels they play but also via humorful references in the storyline and characters they encounter.

The launch of Guardian Tales marks a new step for Kakao Games. After successfully launching Black Desert Online in western markets in 2016, the publisher is now entering the mobile game ecosystem with a promising new product. Minsung Kim, CEO of Kakao Games Europe said the following:

“We’re immensely excited for this next step into a whole new area of gaming. With Guardian Tales, we can bring an excellent title to a new platform, share it with new fans and continue our mission of bringing exciting games to players all over the world”

OG_eXodia
I am passionate about “Heroic Fantasy” and “Beat Them all” games on Nintendo Game System (I hate SEGA). Now that I am old, I love retro gaming, since I don’t have much time. Feels good to watch endings though…
(Visited 1715 times)
Guardian TalesKakao Games

BRAVE THE WINTER THIS HOLIDAY SEASON!