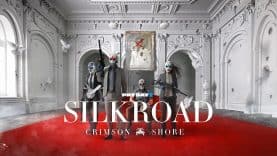 In the concluding installment of the Silk Road campaign, the fourth chapter pits the PAYDAY gang against a powerful cartel boss at his well-guarded mansion on the coast. This full featured update includes an all-new Heist, Weapon, Tailor and Color Pack available to purchase today, as well as a free core game update available for all owners of PAYDAY 2 – finally introducing the expanded Infamy system.

Starbreeze Studios and OVERKILL – a Starbreeze Studio have just released the next update for PAYDAY 2 – “Silk Road – Crimson Shore”. The fourth and final chapter within the campaign adds the “Buluc’s Mansion Heist” DLC, “Gunslinger Weapon Pack” DLC, “Weapon Color Pack 3” DLC and “Tailor Pack 3”, available at $6.99 for the heist, and $2.99, for each of the other DLCs. The long-awaited upgrade to the Infamy system – Infamy 3.0 – will additionally be available for all owners of PAYDAY 2. The content will be released on November 11th, 2020 on the digital distribution platform Steam.

All four DLCs available separately, or as part of the Buluc’s Mansion Bundle at $9.99
Check out the website:https://sbz.studio/FEXWebsiteSBZ

PAYDAY 2 is an action-packed, four-player co-op shooter that once again lets gamers don the masks of the original PAYDAY crew – Dallas, Hoxton, Wolf and Chains – as they descend on an epic crime spree.
With more than 6.9 million community members on the main PC digital distribution platform Steam, PAYDAY 2 have had more than 199 paid and free updates since its release in 2013. First launched in 2011, PAYDAY is a cooperative first-person shooter computer and video game franchise with more than 18 million units sold on PC, SteamOS, PlayStation™ 3, Xbox 360, PlayStation™ 4, Xbox One and the Nintendo™ Switch system. PAYDAY 2 in VR is also available for existing owners of PAYDAY 2 on Steam for the HTC Vive and the Oculus Rift headsets. PAYDAY 2 development was halted in December 2018, but on October 25, 2019, with the introduction of the PAYDAY 2: Legacy collection, it was announced that development had been resumed.

XIII unveils its epic launch trailer ahead of its release on PS4, Xbox One and PC tomorrow!

Stilstand Announced for PC and Mobile

Dead by Daylight : A new chapter

505 GAMES AND LAB ZERO’S Hand-Drawn Action RPG – “INDIVISIBLE” – TO LAUNCH IN OCTOBER on PC, PlayStation 4 and Xbox One