Psycho Wolf, a cartoonish action game in the vein of Don’t Starve, debuts on PC 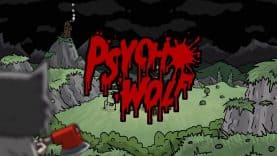 On November 20th this year, Psycho Wolf, a crazy indie game with cartoonish 2.5D graphics and gameplay resembling titles such as Don’t Starve, will debut on PC. The developers focused on simple gameplay rules, a lot of running, exploration, crafting and survival elements, as well as providing opportunities for uncompromising axe-swinging. In the second half of 2021, Psycho Wolf is also to be released on Nintendo Switch.

Psycho Wolf is being developed by the independent Polish studio Hydragon and will be published on PC by Ultimate Games S.A. and Falcon Games S.A.

The new game by Hydragon is an unusual genre mix with a cartoonish 2.5D graphics, created with the single-player experience in mind. The gameplay is based on simple but engaging elements and distinguishes itself through its intensity.

The main protagonist is the titular wolf – a shady scientist who had deceived the inhabitants of his village and now has to face the consequences of his acts.

“Psycho Wolf is a game that doesn’t fit into genres and combines many different solutions. Running plays a crucial role – you’ll need to keep moving almost all the time. There is no shortage of exploration, with various villages and their surroundings waiting to be discovered, as well as survival and crafting elements and opportunities to swing your axe. Psycho Wolf is a title that should especially appeal to fans of Don’t Starve and other similar games” – says Łukasz Majewski, Lead Programmer at Hydragon.

As the developers explain, in Psycho Wolf the gameplay is additionally enhanced by, among others, the possibilities to destroy the environment and claim someone else’s possessions. The game offers approximately 5 hours of uninhibited fun.

The PC (Steam) launch has been scheduled for November 20th 2020. In the second half of 2021, Psycho Wolf will also hit Nintendo Switch.

SNIPER ELITE 4, THE DEFINITIVE WW2 TACTICAL SHOOTER, IS OUT NOW ON SWITCH!