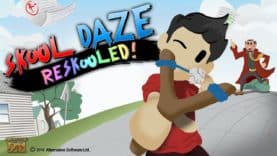 Leeds, United Kingdom – Alternative Software Ltd. is very pleased to announce that  “Skool Daze Reskooled” the official modern remake of the all-time classics “Skool Daze” and “Back To Skool” will be released  on June 7th 2018  for both PC and Mac, on Steam.

Skool Daze is regarded by many as one of the most memorable games in British video gaming. With excitement, drama, comedy, tragedy, oh – and not to forget catapults… It really had everything you could wish for. The Guardian newspaper described Skool Daze as “a genuine charmer as well as an original”. The games main character, Eric, has become a much loved figure within the gaming world – with his cunning and mischievous ways.

Skool Daze is considered by many to be one of the first games to attempt to reproduce a real life experience, replicating the trials and tribulations of being at school. Players of Skool Daze could enjoy rampaging around the school trying to locate the safe combination, setting up traps, scrawling on blackboards, and generally being mischievous!

The sequel to Skool Daze, “Back to Skool” is also considered to be a gaming classic. In this game you spent the whole holiday forging teachers’ signatures and handwriting to make your school report read as if you were the brightest, sweetest natured, most helpful little soul ever to carry a satchel. All that was left to do was get it back into the Headmaster’s safe.

“Given the pedigree of these great classic games” said Roger Hulley (Alternative Software’s Managing Director),” it was felt that the time was now right to bring out new versions!  So here we are: “Skool Daze Reskooled” a modern remake of both these two retro hits, including for good measure an additional game “Nu Skool” “.  “We hope that both retro gaming fraternity and today’s gamers will really enjoy playing “Skool Daze Reskooled”

Sorcery Saga: Curse of the Great Curry God on Steam

Riverbond Will Charm Co-op Adventurers on Nintendo Switch in 2019