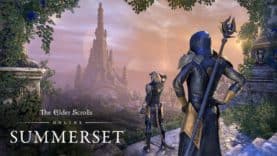 Your new Elder Scrolls adventure begins now on the incredible isle of Summerset – the ancestral home of the High Elves – seen for the first time in a game since 1994’s The Elder Scrolls: Arena.

EXPLORE, EXPLORE, AND THEN EXPLORE SOME MORE
By the decree of Queen Ayrenn, Summerset Isle is now open to foreigners, allowing newcomers to adventure through its beautiful forests and lagoons, and hidden, dark fissures. Players will also travel to mystical Artaeum, a magical isle that transcends space and time. The new zone is the largest addition to ESO yet, surpassing even last year’s massive Morrowind update. Packed with around 30 hours of main story and tons of side quests, Summerset is a mecca for exploration and surprising new tales.

PLAY SOLO, PLAY TOGETHER, PLAY YOUR WAY
ESO: Summerset, of course, can be played solo, like any other traditional Elder Scrolls game. However, with a world full of powerful bosses, dank and mysterious Delves, and a challenging new 12-player trial, players and their friends will find hours of online adventure by banding together to conquer the world’s toughest obstacles. Plus, with ESO’s level-balancing system, new players can group with veterans at any time, on any quest, and all players will find a challenging and fun experience.

LET’S GET PSIJICAL
The Psijic Order has been a mysterious and mystical force in Tamriel throughout time, and in ESO: Summerset, they have returned after disappearing for nearly 300 years.  Players will – for the first time in any Elder Scrolls game – seek out these enigmatic mages and join their order. By mastering the ways of the Psijic Order, players will unlock a powerful new skill line that includes the ability to reverse time itself.

ESO: Summerset is now available globally on PC, Mac, PlayStation 4, and Xbox One.