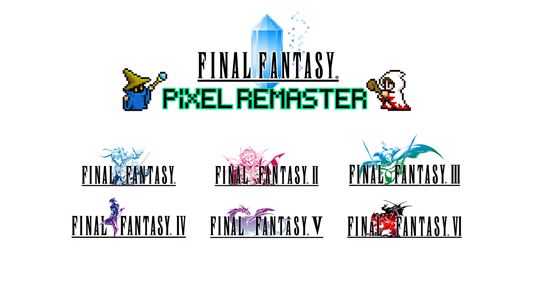 SQUARE ENIX® today announced that FINAL FANTASY, FINAL FANTASY II and FINAL FANTASY III are available today worldwide for PC (Steam®) and mobile. The release of these classic titles kicks off the pixel remaster series, which bring the six original FINAL FANTASY® games that inspired a generation of RPG fans as faithful recreations of the beloved games.
The launch of FINAL FANTASY, II and III brings these timeless adventures to Steam® and mobile platforms, with upgrades including:

Those who purchase FINAL FANTASY, II or III by August 11 on Steam® will receive exclusive bonuses, including three specially rearranged music tracks, two exclusive wallpapers and a 20% discount per each respective title. These special tracks transition from the original versions to the new arrangements and can only be obtained via early purchase until 11th August on individual titles or via the bundle on Steam. The select music tracks include:

Each of these tracks have been given new arrangements under the full oversight of the original composer, Nobuo Uematsu.

FINAL FANTASY III
With the power of light nearly eclipsed by the power of darkness, only the crystals’ four chosen adventurers can save the world.

Experience the iconic job changing system first introduced in FINAL FANTASY III – switch jobs at will and use various abilities as you progress in the game. Choose from a variety of classes including Warrior, Monk, White Mage, Black Mage, Dragoon, Evoker or even call monsters to do your bidding with as a Summoner.

Long-time fans and newcomers can look forward to additional details and the launch of FINAL FANTASY IV, V and VI at a later date. All six games within the pixel remaster series are available for pre-purchase as the FINAL FANTASY I-VI Bundle for a further discount. More information on the bundle is available on Steam at: https://store.steampowered.com/bundle/21478.
*Games in bundle to be available upon respected release timings

OG_eXodia
I am passionate about “Heroic Fantasy” and “Beat Them all” games on Nintendo Game System (I hate SEGA). Now that I am old, I love retro gaming, since I don’t have much time. Feels good to watch endings though…
(Visited 1945 times)
FINAL FANTASY 3FINAL FANTASY FINAL FANTASY 2Retrogaming

‘Blair Witch: Oculus VR Edition’ the World’s Most Haunted Woods on Oculus Rift, here is my first impression and the gameplay