The piano : immersing yourself into a noir-influenced horror game 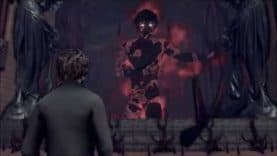 4 JUNE 2018 – Hamburg-based indie developer Mistaken Visions is pleased to announce that, after five years of development, its noir-influenced horror game, The Piano, is out now via Steam.

To celebrate, the studio has revealed a brand new launch trailer, which gives players a taste of the The Piano’s eerie, otherwordly atmosphere.

Part traditional survival horror, part noir-influenced murder mystery, The Pianois an unsettling and riveting indie adventure more than five years in the making. It tells the story of John Barnerway, a young man born to an American father and a French mother, has he searches for answers on the streets of post-war Paris in the wake of his brothers’ deaths.

Designed and developed by Mistaken Visions, The Piano is being released in partnership with Game If You Are. It’s priced at $9.99, although early buyers will get a 25% discount during the first week.

About The Piano
Born to an American father and a French mother in the aftermath of the Great War, John Barnerway lived in the shadow of his three brothers. George, Louis and Valentine were renowned pianists – but when John is accused of their murders, he finds himself at the centre of a media witch-hunt that sees him traversing the lonely streets of Paris in search of answers.