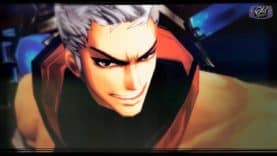 En Masse Entertainment, a player-driven publisher focused on delivering great games and great service, released the free Dawn of Awakenings update for their stylish anime action brawler, Kritika Online. The update brings new content and class growth for max level players, continuing the story that began in April with the release of the Windhome update as players fight through new Danger Zones and earn powerful Dusk weapons and armor for their efforts.

Dedicated Warriors and Monks can log in today to begin their journey towards achieving “Noble” status if they’ve gained a high enough Combat Rating, embarking on an Awakening quest that will put their skills and mastery of their class to the test. Completion of the quest will unlock the Awakened version of their advanced class and grant access to five powerful new skills and a potent passive buff. Players can show off this milestone with a sweet new character portrait that’s visible in-game.

Dawn of Awakenings continues the story that kicked off with the Windhome update, introducing four new Danger Zones to the Windhome Danger Zone highway – explore the Suffering Spring, scale the Dragon Peaks, storm the Gate Portal and traverse the Worldly Pit. A new Ultimate Zone designed for players with some of the most powerful weapons and armor is now available as well, Dusk Pirates’ Den. Battle the Wasteland pirates’ leader, Pirate Shan, and his minions through six stages to earn the newly released Dusk weapons and armor.

For more details about the Dawn of the Awakenings update for Kritika Online, please visit: https://forums.enmasse.com/kritika/discussion/5425/dawn-of-awakenings-update-patch-note

In Kritika Online players can now select from six unique character types—the fierce Warrior, the magical Gunmage, the agile Rogue, the deadly Reaper, the agile Psion or the Monk fighter. They can play solo or team up with friends to rampage through fast-paced levels, defeating enemies and super-sized level bosses using mega blades, alchemical superguns, and dazzling acrobatics.

OG_eXodia
I am passionate about “Heroic Fantasy” and “Beat Them all” games on Nintendo Game System (I hate SEGA). Now that I am old, I love retro gaming, since I don’t have much time. Feels good to watch endings though…
(Visited 12155 times)
Dawn of Awakeningskritika

Nexon Launches Romance of the Three Kingdoms: The Legend of CaoCao (Tactics) on PC