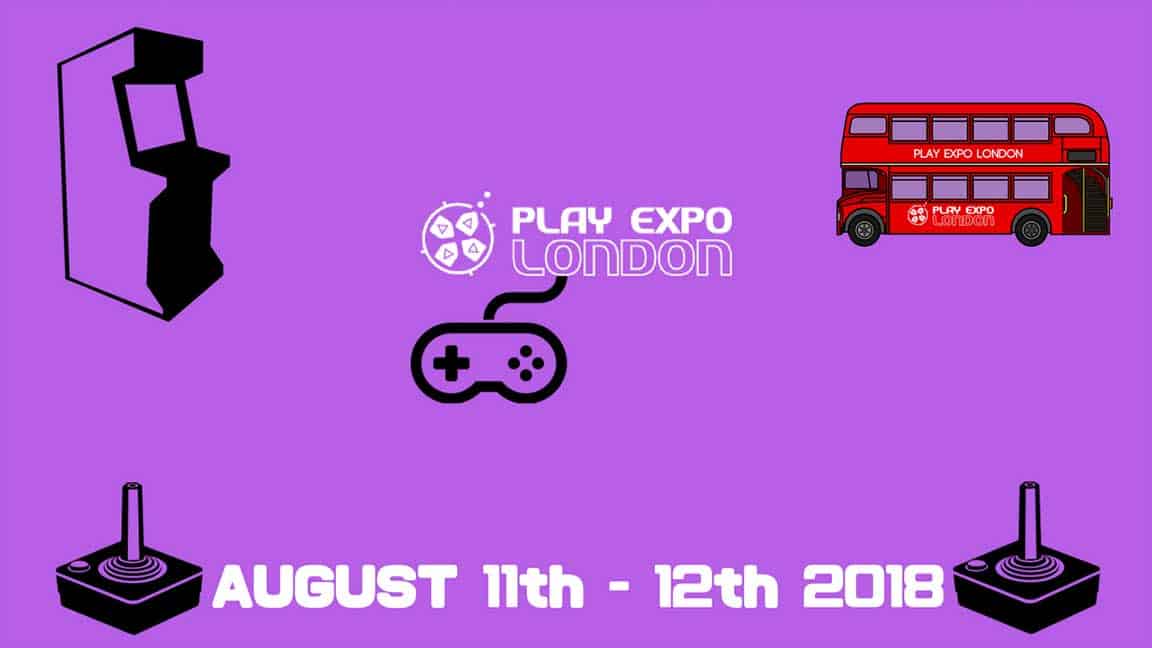 PLAY Expo, the UK’s largest arcade, indie and retro gaming show, comes to London’s Printworks for the first time on the 11th and 12th of August 2018. A must attend event for any videogames fan, featuring hundreds of original arcade and pinball machines, plus consoles and PCs playing a virtual who’s who of gaming classics including Donkey Kong, Pac-Man, Sonic the Hedgehog, Street Fighter, Space Invaders, Super Metroid, The Legend of Zelda, Tetris, Super Mario Kart, Sensible Soccer, Super Mario Bros, GoldenEye 007 and Pokemon.

PLAY Expo also features a huge Minecraft zone, dedicated VR and tournament gaming areas and an Indie Zone, where you can play the best and brightest indie games of recent years. On the Expo stages you will find talks from gaming celebrities, Cosplay displays and tournaments for gamers of all skill levels! Special guests announced so far include:

Ashens Q&A, comedian, actor, author and Internet sensation
Stuart Ashen AKA Ashens will be appearing all weekend long, taking part in a YouTuber panel and Q&A. Ashens is best known for his YouTube channel, which boasts over 1.3 million subscribers. He has written two popular books about retro games – Terrible Old Games You’ve Probably Never Heard Of and Attack of the Flickering Skeletons.

Mr Biffo aka Paul Rose of Digitiser
Remember Digitiser on Teletext? Paul Rose the writer behind Digitiser is appearing at PLAY Expo to talk about his new Kickstarter project to create Digitiser: The Show – an ambitious and anarchic retro gaming series.

The Oliver Twins present ‘The Evolution of Dizzy – the UK’s 80’s Iconic Gaming Hero’
The ‘Oliver Twins’ rose to fame in the 1980s when they developed the Simulator and Dizzy games franchises. They are probably the most prolific 8-bit game developers in the world, having created an amazing 53 games – 26 of which where #1 bestsellers. They founded Blitz Games in 1990 and built it into one of the most successful games studios in the UK. In 2012 they set up Radiant Worlds with co-founder Richard Smithies, which they recently sold to Rebellion.

Sensible Software founder Jon Hare: A Life In Games 1985-2018
Jon co-founded Sensible Software in the 1980s, the company went on to produce some of the most successful games of the late 1980s and early 1990s. Notable titles include the Sensible Soccer franchise, Cannon Fodder games, Wizball, Mega Lo Mania and Wizkid. More recently Jon has worked on an updated version of Speedball 2 as well as Sociable Soccer, the spiritual successor to Sensible Soccer.

Q&A with Mike Montgomery, founder of Bitmap Bros.
“The coolest Amiga developer ever, this studio did things in the early 90s that made their peers weep with envy.” Vice. Founded in 1987, The Bitmap Brothers are the original ‘rock star’ developers: a small but highly successful development team with a history of creating unique, critically and commercially acclaimed games. Continually striving for originality, attention to detail and new levels of playability, the company has been responsible for several of the games industry’s most memorable titles including the Xenon, Speedball and The Chaos Engine games series, Magic Pockets, Gods, Cadaver, Z and most recently the critically acclaimed RTS hit; Z: Steel Soldiers.

Whether you’re a gaming enthusiast or haven’t touched a game in years, you will find yourself enthralled by the wealth of amazing gaming entertainment available at PLAY Expo. The fun starts on August 11th at London’s Printworks, SE16 and runs from 10am until 6pm on Saturday and Sunday. For more information visit playexpolondon.com, facebook.com/playexpolondon/ and twitter.com/replayevents.

About Replay Events
Replay Events is a unique, UK-based company specialising in the organisation of video gaming events and the supply of games consoles, computers and related equipment.

The Replay Events team are responsible for staging some of the UK’s biggest gaming shows including the PLAY Expo events in Manchester, Glasgow, London, Leeds and Blackpool. They have also provided equipment and technical expertise to a number of other highly successful video game and technology-themed exhibitions.

Replay Events were proud to receive the Best Education Initiative award from TIGA in 2012 and were finalists in the 2014 and 2016 MCV games industry awards. Clients include BAFTA, Gamer Network, Science Centre Singapore, Museum of Science and Industry, Endemol, The Urbis Museum, The Gadget Show, GAME, The National Media Museum and many more.

OG_eXodia
I am passionate about “Heroic Fantasy” and “Beat Them all” games on Nintendo Game System (I hate SEGA). Now that I am old, I love retro gaming, since I don’t have much time. Feels good to watch endings though…
(Visited 11225 times)