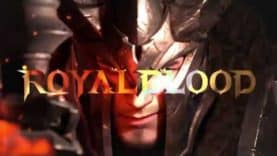 The new king of mobile MMO is available! Royal Blood, the role-playing game signed GAMEVIL, is available for download now on the App Store and the Google Play Store.

Following its release in South Korea earlier this year, Royal Blood has seen a massive overhaul for its upcoming global launch in early June. The game of Korean Gamevil nomadic game specialist aims to become the mobile MMORPG of the future, using a gigantic open world filled with events and opportunities, but especially large-scale battles from Kingdom to Kingdom (RcR), in 70 vs 70.

Royal Blood is not just big battles of kingdoms. A more intimate PvP 3-on-3 arena mode also offers a team-based Gameplay experience, as do the raids to be made in cooperation with friends and / or guild to recover the most epic loots. The adventure mode is fully open, and the ability to travel solo dungeons allows everyone to discover the rich universe and complex scenario of Royal Blood at its convenience.

All the classic activities of the MMO genre are also part of the game: the craft, mining or fishing offer players the resources and objects necessary to evolve their character, before embarking on the bathe of fighting in teams. Royal Blood is the first Korean MMORPG to take place in an open world and function as events, with exciting daily challenges to achieve.

Awarded Best Graphics in the Unite Conference for two years running (Unite Seoul 2017, Unite LA 2016)
Open-world gameplay and instances for a real mobile MMO experience
Gigantic Fighting Kingdoms against Realms in 70 vs. 70 Real Time with Seats, Epic Fights and Group Challenges in the RvR Zone
Players can reach the “Lord” rank every two weeks by participating in RvR
A deep craft system and many things to do outside of the fighting
3v3 PvP arenas, cooperative raids and a huge world to explore

OG_eXodia
I am passionate about “Heroic Fantasy” and “Beat Them all” games on Nintendo Game System (I hate SEGA). Now that I am old, I love retro gaming, since I don’t have much time. Feels good to watch endings though…
(Visited 11465 times)
Game Evilmobile MMO